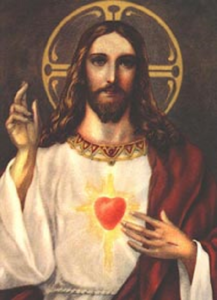 A Brief History of the Devotion

Devotion to the Sacred Heart of Jesus is a devotion that focuses attention on the physical Heart as the symbol of His redemptive love. Although tradition often situates the beginning of the practice of the devotion to the year 1000, it might be more accurate to place its birth during the time of the great mystics [St. Anselm and St. Bernard] between 1050 and 1150. By the middle ages, because of a strong emphasis on the Passion of our Lord, and because of the efforts of St. Bonaventure and St. Gertrude the Great, the devotion became popularized as a means of worshipping the mystery of Christ, living in the Church.

This devotion was promoted by great Saints, including St. Albert the Great, St. Catherine of Siena, St. Francis de Sales, as well as the great religious orders, such as the Benedictines, the Dominicans, and the Carthusians. However, it must be recorded that the Saint who is most often associated with this devotion is St. Margaret Mary Alacoque [1647-1690].

After she received the Vision of the Sacred Heart, which popularized the devotion, she was scorned by her mother superior who thought her to be delusional. The Saint took ill. Mother superior told St. Margaret Mary that she would believe the miracle of the vision if the Saint were cured. She was and St. Margaret was able to promote the devotion under the guidance of her spiritual director, St. Claude Colombiere. Several books have been published on her extensive letters, sayings and the revelations given to her by Our Lord.

Her private revelations promoted the establishment of a liturgical feast day and the practice of offering reparation for the outrages committed against the Blessed Sacrament on the First Fridays and the Promises of the Sacred Heart.

St. Alphonsus was heavily influenced by St. Margaret Mary in his own devotion to the Sacred Heart.

The devotion is usually practiced in preparation for the Feast of the Sacred Heart following the Second Sunday after Pentecost. It is also practiced in conjunction with the monthly First Friday observance that is traditional in many parishes.